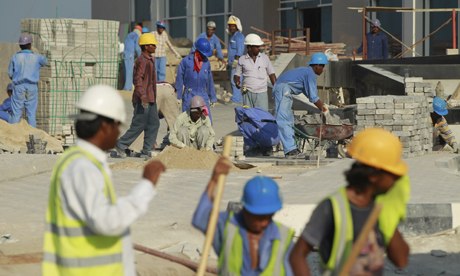 Qatar is likely to face higher labour costs as a result of publicity about the deaths of migrant construction workers building the infrastructure for the 2022 World Cup football tournament, according to the International Monetary Fund (IMF).

The Guardian reported in September that dozens of Nepali workers died last summer in Qatar and that labourers were not given enough food and water.

Qatar, which has denied the Guardian’s findings, has experienced a growing influx of foreigners, now estimated at 1.8 million, with its population rising 10% in 2013.

“Working conditions of some construction workers and domestic help has made global headlines and could affect the availability and cost of hiring new workers in the future,” said the IMF after completing annual consultations with Qatar. “This would hinder growth, since the success of Qatar’s current development model depends importantly on the ability to rapidly hire expatriate workers.”

The gas-rich nation has planned to spend about $140bn (£84bn) on new infrastructure in the run-up to the World Cup, with projects including a metro, port and airport.

Such major public investments entail a possibility of overheating in the near term and low return and overcapacity in the medium term, the IMF warned. “In particular, the extent to which public investment will durably boost private sector productivity remains uncertain,” it said.

Certain big-ticket projects such as the metro, port, and airport have been scaled down or divided into phases to reduce the overcapacity risk. The authorities are preparing a shortlist of critical projects, said the IMF. The relevant projects were not specified.

The large-scale nature of the programme has led to implementation delays and cost overruns, and Qatar will continue to face the risk of cost escalation given its commitment to a compressed timetable ahead of the World Cup, added the IMF.