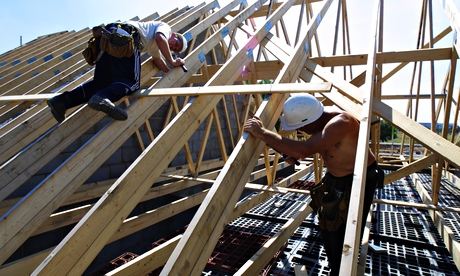 Builders’ order books are rising, the number of mortgages being approved is the highest since the start of the crisis and the coalition says its support for homebuyers is “getting the country building again”. Tales abound of breeze-block shortages and bricklayers’ pay going through the roof. Some commentators talk of a construction boom.

Why then, in the same week have we learned that the number of people sleeping rough in England is up by more than a third since 2010, and that homeownership has fallen to its lowest level in 25 years?

On the surface, the answer is simple. First, this is in no way a construction boom. Output in the sector is still 11.3% below its pre-crisis peak, a weaker picture than for manufacturing or services. Second, although the number of new homes started last year was the highest since 2007, at 122,590, it was still half the rate needed to keep up with the rising number of households – never mind the backlog. The number of homes completed is a more useful figure, and that actually fell last year, by 5% to 109,370 – even further from the 250,000 a year experts say are needed to meet housing demand in England.

Government schemes have clearly missed the mark. In the case of Help to Buy and Funding for Lending, they may have made things worse. Easier money has boosted demand, not supply, and helped send prices soaring in some parts of the country.

On the supply side, the story is no better. Large numbers spouted by politicians should always be taken with a pinch of salt. On housebuilding, make it an entire mine. Promised new homes generally come in round hundreds of thousands. And whether they are from Labour or the Conservatives, they are all fantasy houses.

Noble Francis, economics director at the Construction Products Association, has made a point of tracking such pledges. In 2007, Gordon Brown promised more than 200,000 new homes a year by 2016. “Then,” says Francis, “we went through a whole raft of policies from the coalition that were going to deliver 100,000 homes each, such as Build Now, Pay Later and NewBuy.

More recently, Ed Miliband unveiled plans for new towns and garden cities. “We’ll have a clear aim that by the end of the parliament, Britain will be building 200,000 homes a year,” he said.

The focus on supply is welcome, but politicians need to provide more detail. Who will build all these homes? And how will they clear the hurdles of the planning process and the nimbys who have blocked big housebuilding projects in the past?

On that last question, Westminster must recognise that for all the shake-ups, planning is still seen by many builders as a key barrier. As Steve Morgan, chairman of housebuilder Redrow, said when announcing last week’s results: “The planning system is still failing to deliver implementable planning permissions at a fast enough rate to meet demand for housing.”

The nimbys meanwhile must wake up to the social and economic consequences of their opposition to new homes. There are no prizes for guessing who they are. A project by Shelter shows wealthy executives, flourishing families and affluent greys the most likely to oppose housebuilding. In other words, the lucky few from the comfort of their own – increasingly valuable – homes.

Sure, lack of housing gives you a nice expensive house to retire on, but it also means your children are unable to fly the nest. There is also the cost to taxpayers as house prices go on rising faster than wages. The proportion of working households claiming housing benefit is now higher than when the coalition came to power.

More housing requires a cultural shift in house-price-obsessed Britain, as the National Housing Federation argues in its “Yes to Homes” campaign. It wants a voice for those banging on the closed door of the housing market.

The group, which lobbies for housing associations, is also tackling the question of who builds all the new homes. Osborne would do well to consider the federation’s demand for his budget this month to speed up land release and improve housing associations’ access to finance.

But housing associations and private housebuilders alone are unlikely to get us to the hundreds of thousands. If government really wants to fulfil those promises it needs to get its hands dirty.

Local authorities and central government must build houses on a large scale. That would mean more affordable homes, but would spur private housebuilding, too. A new player with a big landbank would shake up the market, so that big housebuilders make money primarily from building houses rather than relying on land values and rising prices.

The budget gives Osborne an opportunity to let councils become housebuilders again. His move at the autumn statement to relax limits on borrowing to finance construction was welcome, but local authorities say ditching the cap altogether would allow them to build 60,000 homes, rather than 10,000.

Of course, such public building will be from a standing start. But after years of chronic housing shortage, even a slow turnaround is better than no turnaround.